Andrew is the founding member of the board of Healthy Stuff and formed the original company in 2008. He continues to offer support in an advisory role to the directors as he has a keen interest in new tests, processes and technologies.

Before Healthy Stuff, Andrew was a police officer in the Leicestershire Constabulary where he reached the rank of Inspector before retiring in 2000 to concentrate on his health. After this, he moved into the health market with a juicing café in Loughborough and then onto a successful wellness centre in Spain. Obsidian Wellness helped over 5000 people to control diabetes and lose weight, whilst receiving a lot of positive attention from the media.

Following his move into health, Andrew discovered an interest in alternative medicine and non-conventional approaches to illness. Starting with one website testyourintolerance.com his idea has evolved into Healthy Stuff as it’s known today which includes state-of-the-art laboratories, an extensive range of testing services, spanning 42 different countries, and helping over 450,000 people. 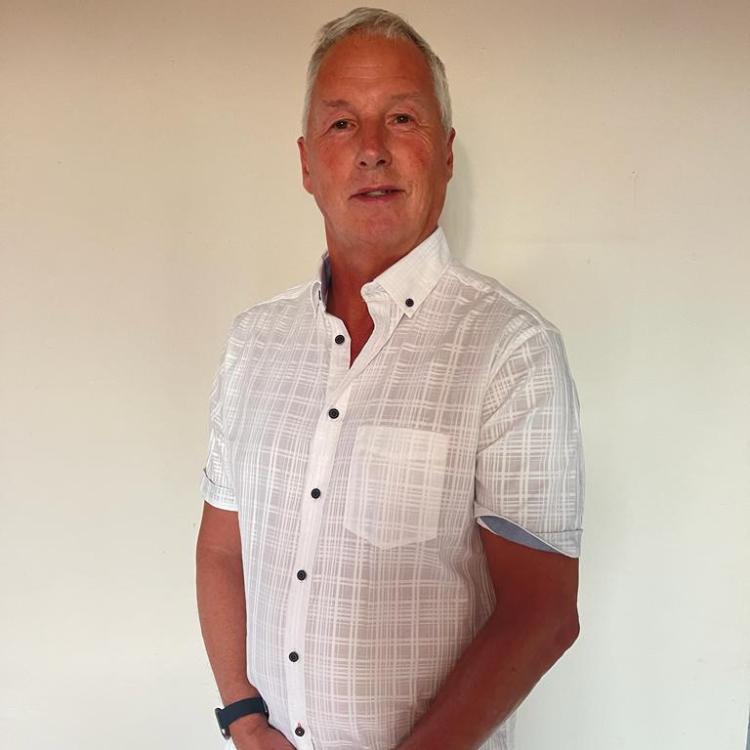 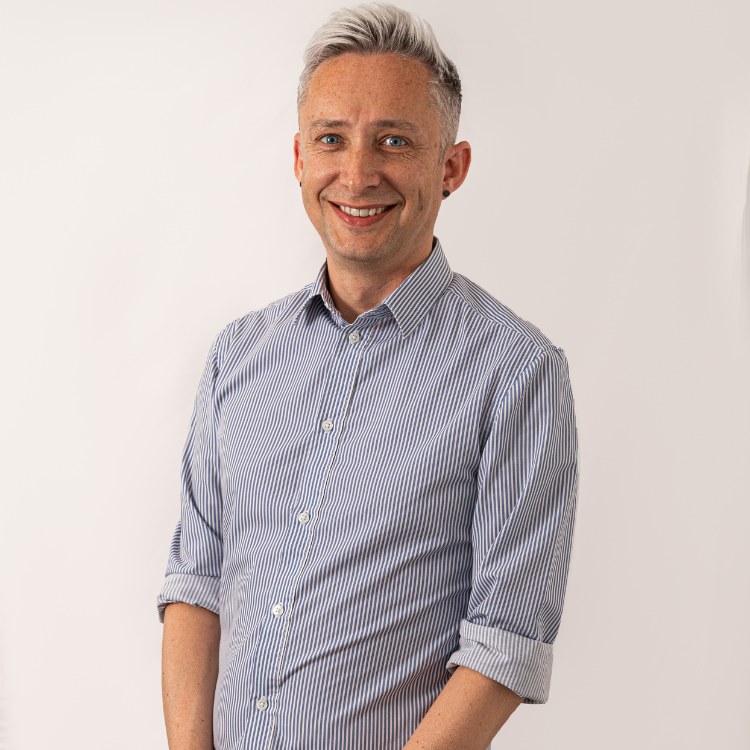 Jason has been the Managing Director of Healthy Stuff Online Limited since 2018 after a period of working for the group as the head of marketing. During his early career, he worked in the insurance profession, developing bespoke insurance products for members of affinity groups and associations. In his spare time, Jason still uses his entrepreneurial talents to develop new ideas and businesses. At 21 he started his first business in his spare time hiring bouncy castles and soon progressed to running a chain a promoted nightclub events throughout the Southwest.

Jason joined Healthy Stuff at the start providing a lead in the marketing of the business and the growth of the UK business. After several years, he left the business to live in Spain with his partner and develop their own marketing company and build a successful escape room business.

After selling the businesses and returning to the UK to start a family, Jason returned to the Healthy Stuff family and has continued to push the company forward with his dedicated team.

One of his proudest achievements in the business is applying the principles introduced in the insurance industry of treating customers fairly and providing clients with critical facts to the healthy stuff tests to allow them to purchase a product or service that is right for them.

Jason and his partner recently became adoptive parents and loves nothing more than spending time as a family travelling, eating out and doing fun things together.

The future for healthy stuff is exciting, and Jason and his team work tirelessly to provide first-class service, innovative products and services and continue to be the worlds leading allergy and intolerance testing business.

Cris is the Director of Operations for Healthy Stuff Online Ltd and has been a part of the company since August 2017. He initially joined as part of the marketing team and has helped the company to grow and reach more people across the world via more channels.

Graduating from Leeds Metropolitan University with a BA (Hons) Entertainment Management, he moved to Javea, Spain to set up a marketing company for small businesses on the coast to be able to reach new client via social media and new sites. Cris created new content, offered proofreading services and worked on the SEO pages on new sites. While in Spain, Cris also opened an escape room aimed at holidaymakers and led people through the bookings.

At Healthy Stuff, Cris works closely on the customer journey, to ensure each customer gets more information and leaves with a higher level of satisfaction due to better communication.

In 2019, Cris began managing the Customer Service team and has allowed them to respond faster, and also have 24/7 LiveChat communication, on all channels. Customers can always get the up-to-date, correct information on their results, and be able to speak to a real person.

Within the company, Cris manages a team of 11 people across Marketing and Customer Service and believes that communication is a critical point in allowing a team to work together successfully.

In his personal life, Cris is happily partnered, and they have adopted a son as of 2019. They have a small dog they rescued from Spain called Foxi. He enjoys spending time with his family, keeping fit with walking and geocaching, and eating out. He is passionate about zombie films, and TV shows like RuPaul’s Drag Race. 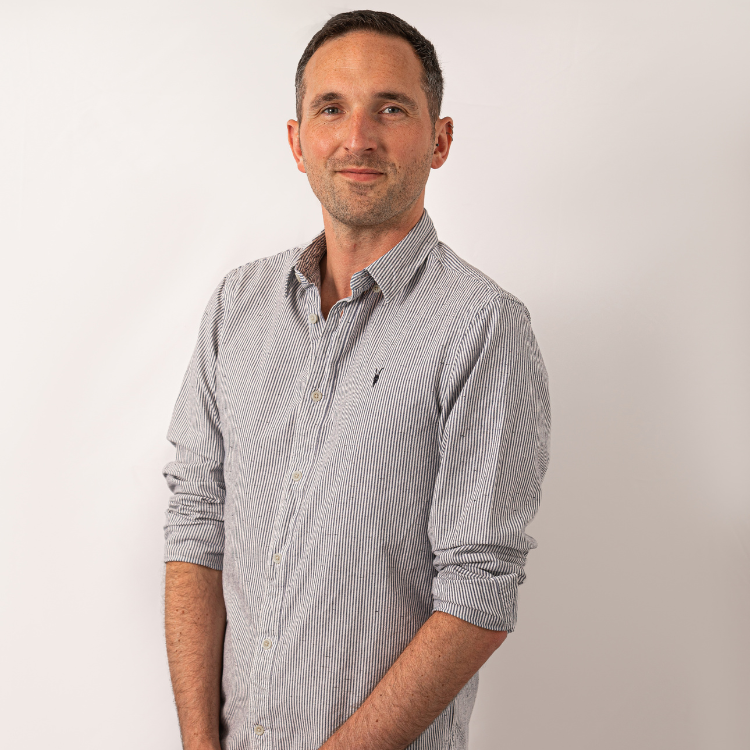 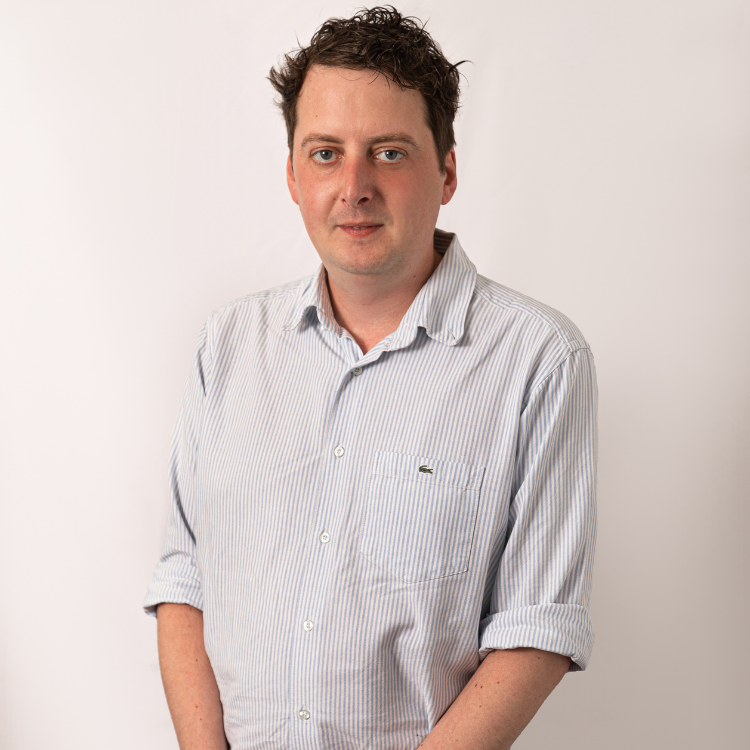 Andy Gair, our Head of Finance, joined Healthy Stuff in August 2021, and manages the accounts department, in addition to reporting directly to the Board. Andy has over 15 years’ experience of working in accounts environments, for a range of industries and company styles, from SMEs and NFP to Blue chip.

Andy started off in accounts practice, gaining a wide knowledge in the process and analysis, in addition to tax works, and helping with strategic planning for clients. Following this, Andy began to work in the industry for SMEs, primarily in the East Midlands, with the look to increase growth and automation of systems in businesses. Andy also has experience in creating teams and infrastructure for growing businesses. He is used to working closely with key stakeholders to ensure the company is correctly identifying inefficiencies and looking for solutions to rectify these. His main joy in the job comes from driving companies forward and building infrastructure and systems to support a company’s growth.

Outside of work, Andy enjoys following local sports teams, having been a lifelong Leicester City Fan, walks in the countryside, and visiting sites of historical interest, in addition to charity works.

­­­Louise Kate Young, our Lab Manager, joined Healthy Stuff in October 2020, and she has over 20 years of experience as a Clinical Bio Scientist and Embryologist in both clinical NHS hospitals and private laboratories in the UK and Japan.

She graduated with a BSc in Human Biological Studies from Leicester University, moved to Japan in 2006, where she specialized in IVF and embryology. As part of the research team, she developed novel IVF methods. She collaborated internationally on various clinical/non-clinical research trials, such as non-invasive diagnostic tools for the simultaneous analysis of endometrial receptivity and microbiota to improve reproductive outcomes in infertile patients. The early years of her career included Lab supervisor at Nottingham City Hospital’s Sperm Bank and Product Research and Development Technician at Boots PLC in Nottingham, testing sunscreen SPF’s and non-irritant baby products before focusing her expertise in ART (Assisted Reproductive Technology) and Genetics, which became her passion.

Kate manages and coordinates our laboratory testing, including processing protocols, validations, research and ensures the highest level of in-house and required regulatory standards are maintained. She oversees the implementation of new technology and techniques to improve our services and laboratory practices constantly.

Kate’s life outside of work is somewhat both scientific and creative. She has successfully held several art exhibitions in Japan and worldwide that combine her love of science, which focused on different cultures combining both the traditional and modern ideals. She loves gardening but takes a scientific approach to it rather whilst studying a Diploma in Botany. She loves cooking food from all over the world and trying new recipes making her kitchen a cuisine lab. Kate enjoys a Japanese concept called “wabi-sabi”, which involves nature, acceptance, mindfulness, and teaches kimono on her weekends. 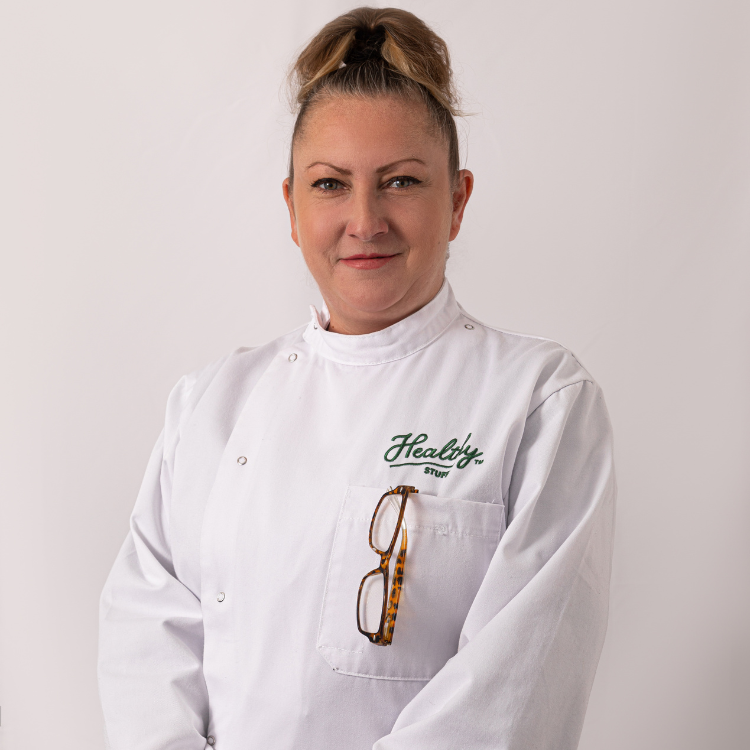 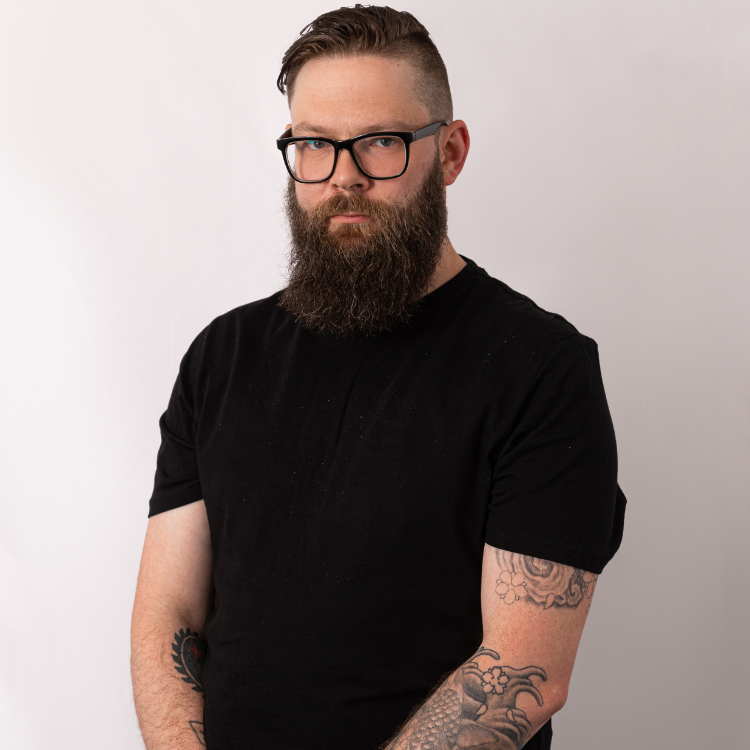 Roy joined Healthy Stuff in February 2022 as Operations Manager. Having worked for over a decade in the automotive industry as well as for a large distribution firm, Roy is well equipped with the vast knowledge to help Operations run smoothly on a day to day basis. Roy has an NVQ level 3 in Business and Warehouse Improvement as well as a Degree from the University of Alberta in Dinosaur Paleobiology.

Outside of work life, Roy is a keen musician who has toured and played some of the biggest shows and festivals in the world as well as having multiple videos, albums and singles and TV spots to his name. He has also featured and had writing credits on some successful records. He is currently studying for his Grade 8 in guitar and hoping to take a degree in teaching. He is also an avid motorsport fan, especially F1 making working at a place so close to where his love began at a revered race track an added bonus!

Lisa Hardy joined the Healthy Stuff Team as Human Resources Officer in February 2022. She graduated from Warwick University with a BA (Hons) degree and has over 15 year’s experience in Human Resources in a variety of settings from small start-ups to the NHS. She is an Associate Member of the CIPD, which keeps her updated with all current legislation, and has recently completed her Level 7 in Human Resources Management.

Part of her role at Healthy Stuff is to oversee the practices and policies, making sure things run smoothly, supporting staff, and overseeing the recruitment and onboarding process. Outside of work-life Lisa enjoys eating out and spending time with her family, reading and walking her two dogs, Poppy and Honey. She has owned and ridden horses for a huge part of her life but nowadays prefers to keep her feet firmly on the ground! 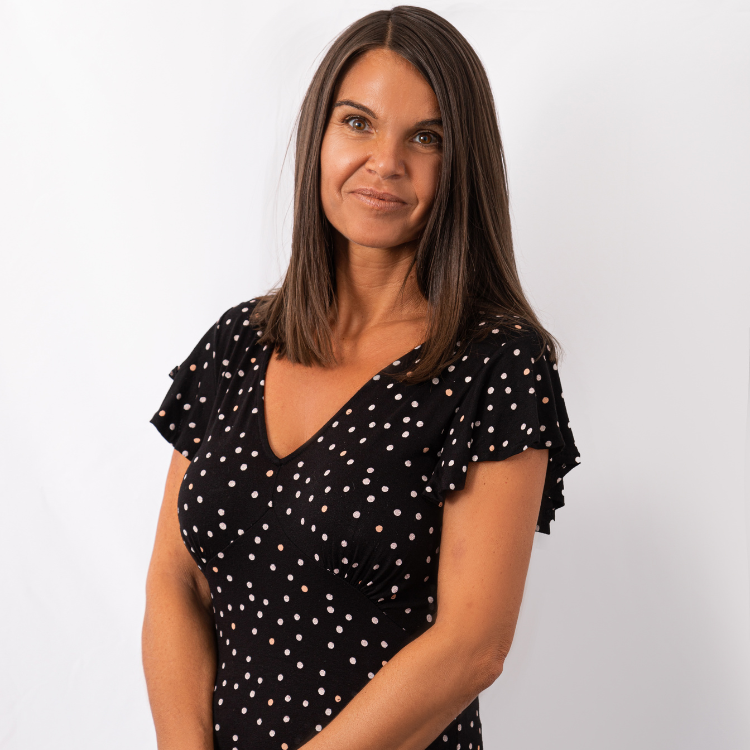 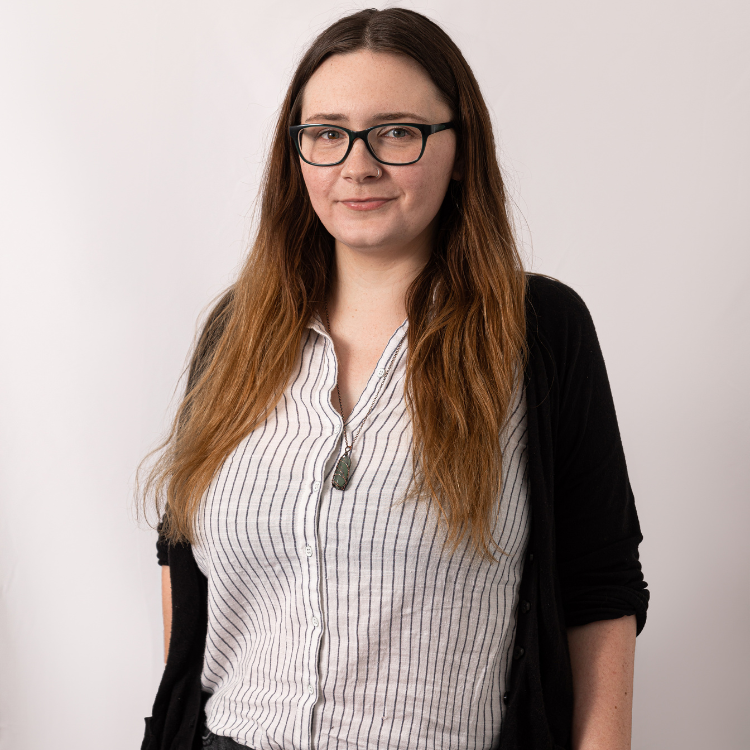 In her personal life, Donna is happily married, and the mother to a daughter born 2019, and three rescue cats. Donna is very passionate about animal welfare and environmentalism and has been vegan since 2015. Her hobbies include reading, baking, gaming, playing piano, and attempting to keep fit after all the baking!

Outside of work Adam is an avid gym-goer and enjoys swimming and playing pool. On the weekends he loves go-karting and has a personal best of 39.8 seconds at the Leicester track. He also plays in a mid-week crown green bowls league and is keen to improve his game. 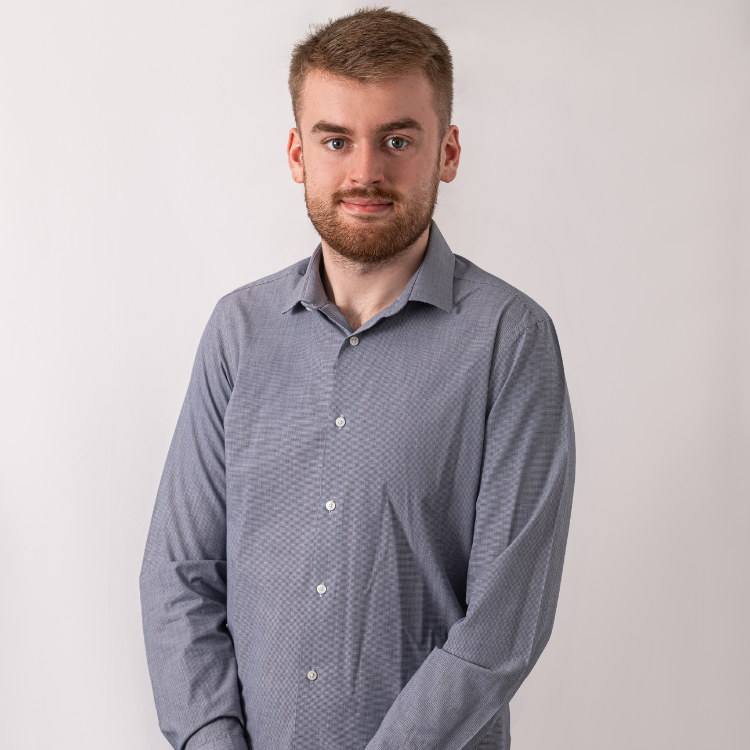 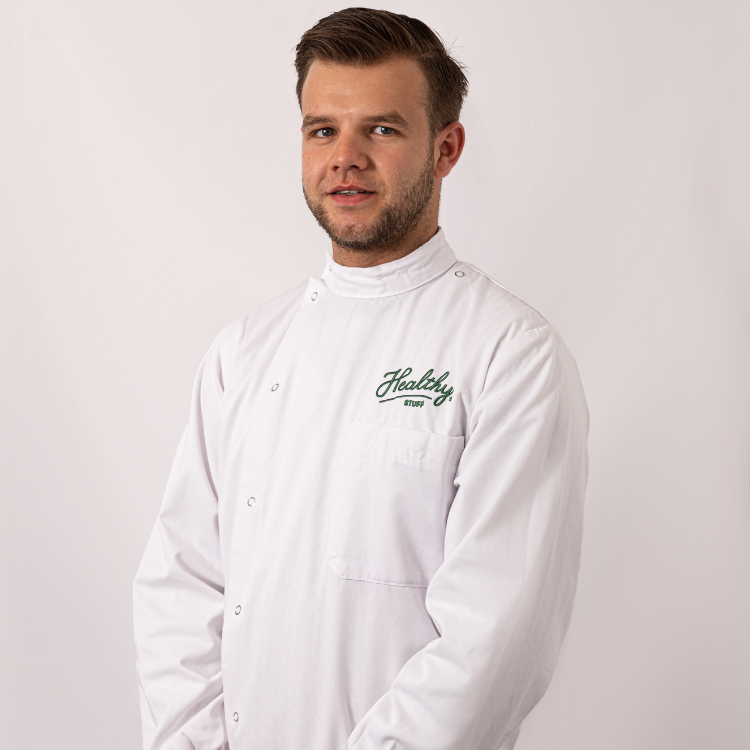 Lewis Peck joined the Healthy Stuff team as a Laboratory Supervisor in 2022. He graduated from Derby University with a BSc (Hons) degree in Biomedical Health. He has experience working in a high-throughput accredited SARS CoV-2 laboratory using PCR and next-generation sequencing to deliver diagnostic results.

As Laboratory Supervisor, Lewis will oversee the day-to-day running of the laboratory, supporting staff and liaising with the customer service team to deliver allergy and intolerance results. Outside of work Lewis enjoys taking his dog on walks to the Peak District. He likes to go to Zumba classes and tries to keep fit by going on mountain climbs, such as Snowdon and Scafell Pike.

We use cookies to ensure that we give you the best experience on our website. If you continue to use this site we will assume that you are happy with it.OkPrivacy policy